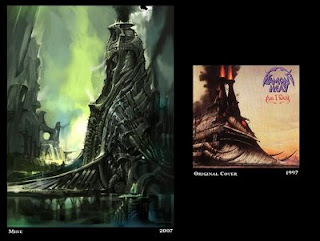 So this album got released in 1987 and have influenced me and Metallica heavily, ( i was 15 and I was deep into metal back then) but more so... the image of gigerish train just stuck in my head like a bad nightmare so long, I did attempted to do my own version of it so here it is. This was done last year for Nucleus GOW book signin artshow.
I hope metallica play the song this thursday at Western Forum.
Listen to the "Am I Evil" original

Very interesting, and thank you for the portfolio help.

Man this is piece is sweet. I love the eerie mood you got going on in there; definitely a step up from the original artwork.

wow Cecil,
Epic, moody, scary and just cool!
i love the design and the illustration is great.
-james

btw I really enjoy the VGA trailer of GOW III.